In the first project phase, a functional model for the OCR-D workflow was developed. Full text recognition is seen as a complex process that includes several upstream and downstream steps in addition to the actual text recognition. First, a digital image is preprocessed for text recognition by cropping, deskewing, dewarping, despeckling and binarizing it into a black and white image. This is followed by layout recognition, which identifies the text areas of a page down to line level. The recognition of the lines or the baseline is particularly important for the subsequent text recognition, which is based on neural networks in all modern approaches. The individual structures or elements of the fully text-recognized document are then classified according to their typographic function before the OCR result is improved in the post-correction, if necessary. Finally the end result is transferred to repositories for long-term archiving.

From the project proposals for the DFG’s module project call in March 2017, eight projects were approved: 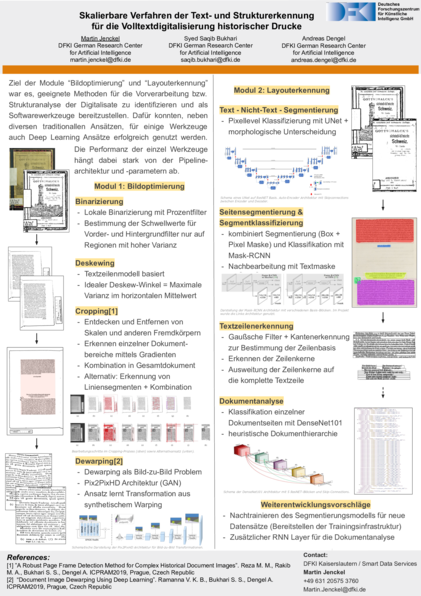 DFKI was involved in the OCR-D project with two modules: Image optimization and layout recognition. In both modules several processors were developed and integrated into the OCR-D software system.

The first module project image optimization focused on the pre-processing of the digitized material with the aim of improving the image quality and thus the performance of the subsequent OCR modules. For this purpose, tools for binarization, deskewing, cropping and dewarping were implemented.

The cropping tool based on computer vision is particularly noteworthy for its performance. It predominantly achieves very good results on the entire project data. The dewarping tool is also interesting due to its novel architecture. Generative neural networks are used to generate equalized variants of images instead of determining explicit transformations for the equalization.

In the second DFKI module project layout recognition, the aim was to extract the document structure, both of individual document pages and the entire document. On the one hand, the metadata obtained in this way helps to digitize the document as a whole, on the other hand, the extraction of certain document structures is necessary. For example, most OCR methods can only process individual lines of text. The tools developed are used for text-non-text segmentation, block segmentation and classification, text line detection and structure analysis.

One focus of development was the combined block segmentation and classification based on the MaskRCNN architecture known from video and image segmentation. This tool works with the unprocessed raw data, so that on the one hand no pre-processing is necessary and on the other hand the full information spectrum can be used. 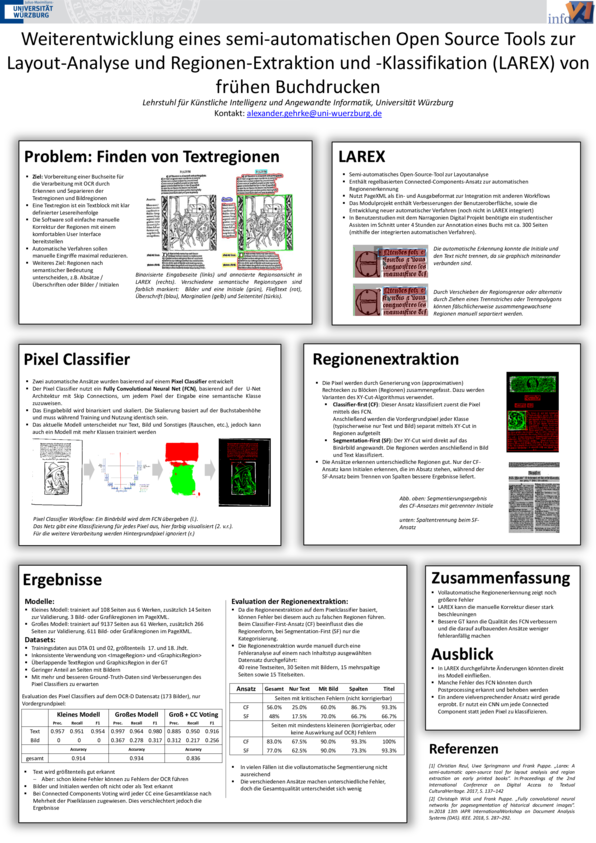 At the Department of Computer Science VI at the University of Würzburg, LAREX was developed in the preliminary work. LAREX is a comfortable editor for annotating regions and layout elements on book pages. In the further development of the OCR-D module project, the focus was not only on improving efficient operability but also on expanding automatic procedures.

For this purpose a Convolutional-Neural-Net (CNN) was implemented and trained, which assigns each pixel of a page scan a classification in different classes in order to separate image and text. By considering the pixels of only one class each, a segmentation of the page is then carried out with classical methods. Another tested approach first used classical segmentation methods and then classified the segments.

The segmentation method based on CNN output was adapted to the OCR-D interfaces. Good results were achieved on pure text pages or pages with clearly separated images. There is potential for improvement especially in the recognition of decorative initials of older prints and other images close to the text as well as multi-column layouts. 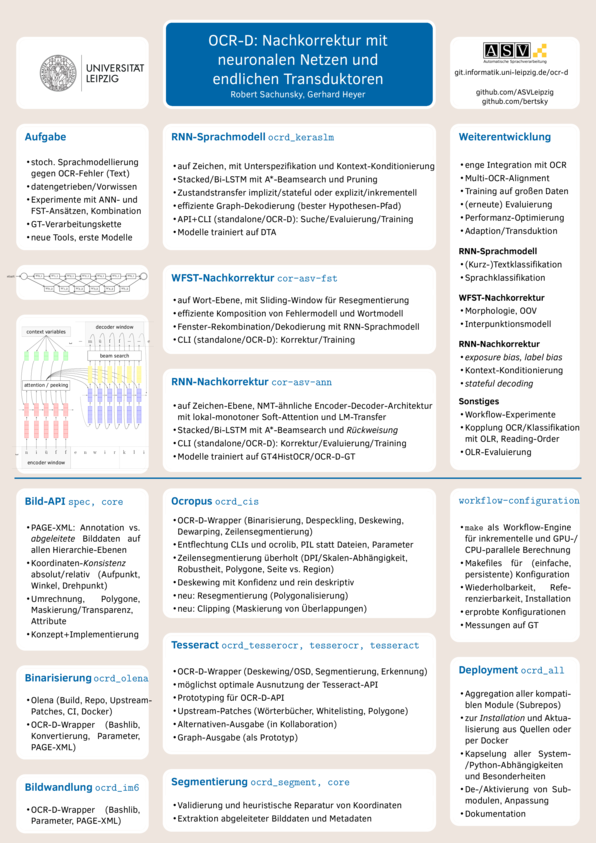 A fully automatic post-correction separately from the actual OCR only makes sense if statistical knowledge about “correct text” and about typical OCR errors is added a priori. Neural networks (NN) as well as weighted finite transducers (WFST), which can be trained on corresponding additional data, are suitable for this purpose.

For the implementation of a combined architecture of NN and FST it was decided to implement three modules:

The combination of 3. with 2. thus represents a hybrid solution. But also 1. can benefit from 2. (if the same network topology is used) by initializing the weights from a language model trained on larger amounts of pure text (transfer learning).

Both approaches benefit from a close connection to the OCR search space, i.e. a transfer of alternative character hypotheses and their confidence (as so far only possible with Tesseract and realized in cooperation with the module project of the Mannheim University Library). However, they also deliver good results on pure full text (with CER reduction of up to 5%), provided that sufficient suitable training data is available and the OCR itself delivers useful results (below 10% CER). 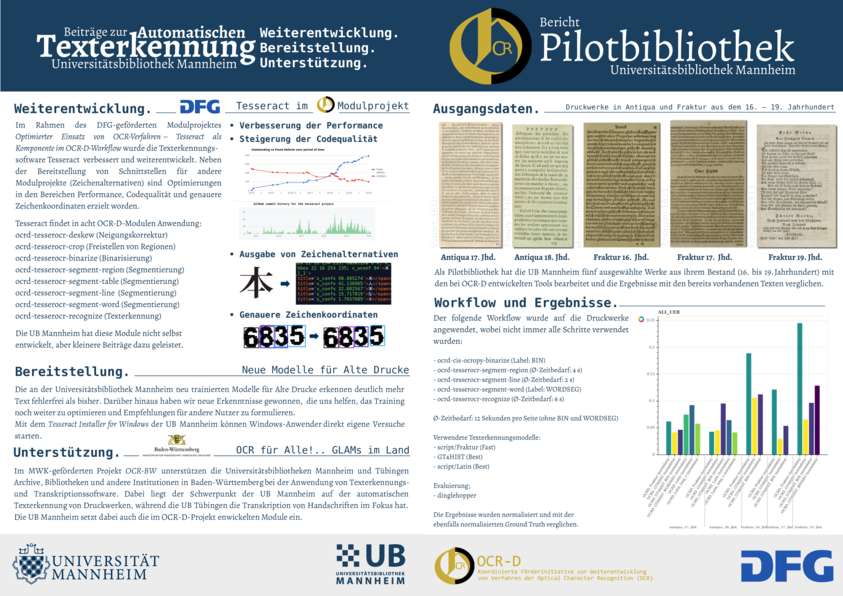 The module project focused on the OCR software Tesseract, which has been developed by Ray Smith since 1985, since 2005 as open source under a free license.

The project had two main goals: The integration of Tesseract into the OCR-D workflow including support of the other module projects by providing interfaces, and the general improvement of stability, code quality and performance of Tesseract.

The integration into the OCR-D workflow required much less effort than originally planned; mainly because most of the work had already been done outside the module project and the existing Python interface tesserocr could be used.

For the OCR-D module project of the University of Leipzig, Tesseract was extended to generate alternative OCR results for the single characters. As input data for an OCR post-correction model, text recognition can thus be further improved. A valuable side-effect of the new code are more accurate character and word coordinates.

With several hundred corrections, the code quality was significantly improved and a much more stable program flow was achieved. Tesseract is now more maintainable, requires less memory and is faster than before.

A significant improvement in recognition accuracy for most of the printing units relevant for OCR-D was achieved by new generic models for Tesseract. These were trained from September 2019 until January 2020 on the basis of the data collection GT4HistOCR. 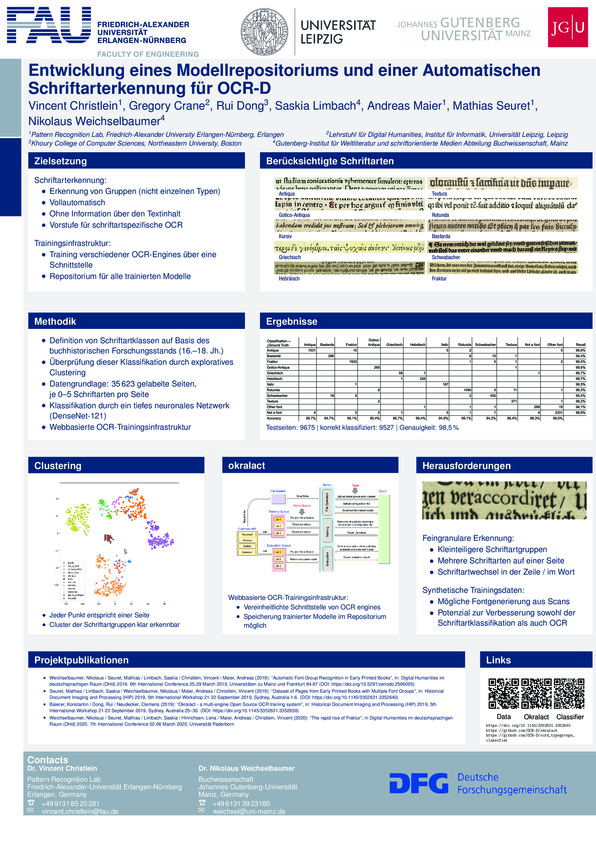 The recognition rates of OCR for prints produced before 1800 vary greatly, as the diversity of historical fonts is either not taken into account at all or only insufficiently in the training data. Therefore this module project, consisting of computer scientists and book historians, has set itself three goals:

On the one hand, we have developed a tool for the automatic recognition of fonts in digitised images. Here, we have concentrated especially on broken fonts besides fracture, which have received little attention so far, but were widely used in the 15th and 16th centuries: Bastarda, Rotunda, Textura and Schwabacher. The tool has been trained with 35,000 images and achieves an accuracy of 98% in determining fonts. Overall, it can not only differentiate between the above mentioned fonts, but also distinguish between Hebrew, Greek, Fraktur, Antiqua and Italic.

In a second step, an online training infrastructure was created (Okralact). It simplifies the use of different OCR engines (Tesseract, Ocropus, Octopus, Calamari) and at the same time makes it possible to train specific models for certain fonts.

Finally, a model repository has been set up that contains already developed font-specific OCR models. To lay a foundation here, we have transcribed a total of about 2,500 lines for Bastarda, Textura and Schwabacher from a variety of different books.

The high accuracy of the font recognition tool opens up the possibility of having the tool even distinguish between the fonts of individual printers in the future through further training data, which would address several desiderata of historical research.

The aim of OLA-HD is to develop an integrated concept for long-term archiving and persistent identification of OCR objects, as well as a prototypical implementation.

In regular exchange with the project partners, the basic requirements for long-term archiving and persistent identification were determined and recorded in the form of a specification for technical and economic-organizational implementation.

With the prototype the user can upload OCR results of a work as OCRD-ZIP into the system. The system validates the zip file, assigns a PID and sends the file to the archive manager (CDSTAR - GWDG Common Data Storage Architecture). This writes the Zip file to the archive (tape storage). Depending on the configuration (file type, file size, etc.), files are also written to an online storage (hard disk) for fast access. The user has access to all OCR versions and can download versions as BagIt-Zip files. All works and versions have their own PIDs. The PIDs are generated by the European Persistent Identifier Consortium (ePIC) service. The different OCR versions of a work are linked via the PID, so that the system can map the versioning in a tree structure.

Users who are not logged in can browse the inventory and preview text and - if available - images in the file structure or navigate through the different versions. Users can register and log in via the GWDG portal and manage their files via a dashboard.

By March 2020, minor optimizations will be made to the user interface and the concept will be finalized. The concept will describe further expansion stages that may be useful for transferring the prototype software into a product.